At the Bookfair in Frankfurt 2016, some weeks ago, I had the pleasure of meeting Ute Wegmann. She interviewed me several times, and one of those interviews can be read online, in German.
It's the transcript of the talk Rold Erdorf (my translater) and me had for a radiostation called Deutschlandradio. It was nice to be a guest in lovely Ute Wegmanns show!

Here is the interview.

SAM IN THE US 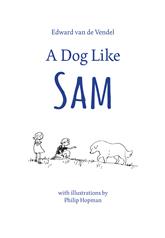 Last week my first book about the dog Sam came out in the United States. In Dutch it's called TOEN KWAM SAM and in the version that Eerdmans' Publishing House issued it's named A DOG LIKE SAM. It was beautifully translated by David Colmer, and of course the original illustrations by Philip Hopman are included.
Next year also the second volume about the dog will be published!

The book came out in Holland in 2011 and was awarded with the Zilveren Griffel (Silver Slate) one year later. Further editions are the French, the German, the Estonian and the South-African one, where it was published in all the official eleven languages of the country.
Rights can be seen here, and the Dutch Literary Fund is giving out grants for the translation of this book (and others). 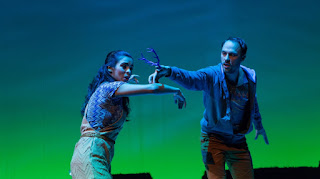 Friday afternoon, the 4th of November: that's the date for the premiere of  LENA UND DAS GEHEIMNIS DER BLAUEN HIRSCHE, a children's musical play in the Deutsche Oper in Berlin. It's music theatre, performed by a puppeteer, a singer and two musicians.
The play was written by Annechien Koerselman, and Händels music is being used, as well as new compositions by Sebastian Hanusa. 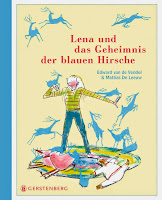 The play is based on the German version of my book DERTIEN RENNENDE HERTJES (THIRTEEN RUNNING DEER). I made this book with illustrator Mattias De Leeuw and it was published by De Eenhoorn in Flanders, Belgium. The German version was translated by Rolf Erdorf and issued by Gerstenberg.