A little while ago the Korean translation of THE DOG THAT NINO DIDN'T HAVE was published in South-Korea, at the publishing house of Jiyangsa. This book, made by illustrator Anton Van Hertbruggen and me, was already issued in German, Chinese, Danish, French and American English. The Brazilian version will follow soon.
Originally the book was published by De Eenhoorn. It got several awards, including the 'Gulden Palet' (Netherlands), the 'Boekenpauw' (Belgium), the 'Prix Sorcières' (France) and the Silver Medal of the Society of Illustrators (USA).
Rights can be viewed here. 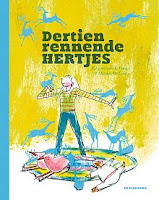 But more Korean books are coming. The publishing house of Lime co. bought the Korean rights of THIRTEEN RUNNING DEER, the book that Mattias De Leeuw and I made. This will be out in the fall of 2016 and after the German, Chinese (mainland) and Chinese (Taiwan) it will be the fourth international version. Recently the book was nominated for the German Literature Award.
Rights can be checked at De Eenhoorn, here.
Gepost door Edward op 04:43 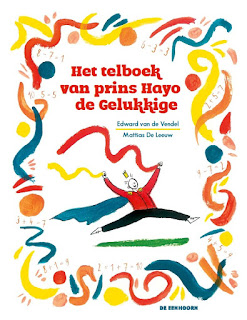 The book is not out yet - it will be soon, in March. But by now (February) the rights are already sold to Germany. To the publishing house of Gerstenberg. I'm talking about THE COUNTING BOOK OF PRINCE HAYO THE HAPPY - a big and colourful picturebook ánd a counting book, all in one. Made by the dazzling Mattias De Leeuw (pictures), the text is by me.

We worked together on two books before: THIRTEEN RUNNING DEER, that was sold to Germany, China, Taiwan and South-Korea, and received a nomination for the German Literature Award 2015.
We also made a poetry-picture book about happy sounds: MY HAPPY BOOK OF SOUNDS.

As for PRINCE HAYO: for the coming bookfair of Bologna this book is available at both the original publisher (De Eenhoorn) and the Flemish Literature Fund.

You can take a look at a few pages of the book here.