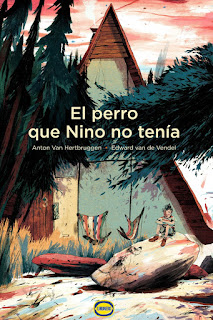 THE DOG THAT NINO DIDN'T HAVE just came out in Argentina. This Spanish edition was translated by Micaela Van Muylem and published by Limonero. It was Anton van Hertbruggens debut, and an acclaimed one: he got awards in Belgium, the Netherlands, France, Germany and the United States!

More about this book and the remaining rights & where to send your requests for grants/rights: here.
Gepost door Edward op 04:15