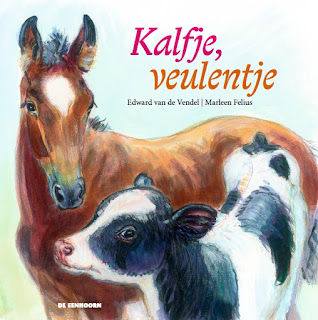 For years I've been adoring the work of artist Marleen Felius. Her work - main topic: cows and cattle - is known and valued all over the world. Her 'Cattle breeds encyclopedia' (text and images by Marleen) is a magnificent work of art and knowledge.
Finally we found a chance and the time to work together.  The result of this is the sweet and lifelike LITTLE CALF, LITTLE FOAL. Which is out now!

This book has a very, very simple text, which talks about the first hours and days of a newborn calf and those of a newborn foal. The pictures show it all: the first drinking, the standing-up, the first time they see the meadow. It's almost non-fictional (because, when Marleen Felius is involved, you know that everything is true to life and no mistakes are made!), but still a small story.

Thanks to publishing house De Eenhoorn and designer Dries Desseyn. A proof translation in English is available, and this is the foreign rights page of De Eenhoorn. 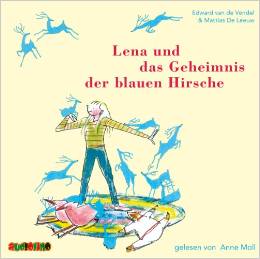 Soon my first audiobook in Dutch will be out. It's TOEN KWAM SAM (THEN THERE WAS SAM), and I narrated the book myself.
In the meantime my first audiobook in German (LENA UND DAS GEHEIMNIS DER BLAUEN HIRSCHE) is nominated for the German Audiobook-award - the BEO, Deutscher Kinderhörbuchpreis. Yesterday it was announced that the book, read by Anne Moll, illustrated by Philip Hopman, translated by Rolf Erdorf and published by Gerstenberg (book) and Audiolino (audiobook), is on the shortlist.
More about the award and the shortlist: here.

One of the nicest, biggest and most impressive literature festivals in the world is the annual Literaturfestival in Berlin. It started this week. There will be many, many readings by many, many authors.
I was part of it in 2006 and 2011, and, I'm really happy about to say - this year again! I'll be present from the 12th til the 19th of September. I'll talk about my books THIRTEEN RUNNING DEER (DERTIEN RENNENDE HERTJES, in German issued as LENA UND DAS GEHEIMNIS DER BLAUEN HIRSCHE, with Mattias De Leeuw, Gerstenberg) and THE DOG THAT NINO DIDN'T HAVE (HET HONDJE DAT NINO NIET HAD, in German: DER HUND DEN NINO NICHT HATTE, with Anton Van Hertbruggen, Bohem Verlag, both books translated by Rolf Erdorf).
Take a look at the impressive list of authors that will be in Berlin. Amongst them: Peter Brown, Frank Cottrell Boyce, Jandy Nelson, David Almond, Sjoerd Kuyper and Kaatje Vermeire!
And check the programm here.
Gepost door Edward op 04:08