Sam to a brand new language...

I wrote two books about a big, dreamy, almost magical white dog, called Sam. The first book was A dog like Sam (2011) and the second one Sam in winter (2012). The illustrations were by the awesome Philip Hopman and the original publishing company was Querido.

The books were sold to the US, to France, Germany, Estonia and South-Africa, but now there's a whole new language for the Sam-adventures: the publishing house of Petrkov bought the rights for the Chech versions of the books. I am very happy that both books will be published in Chech Republic next year!

Thank you very much, Petr Novotný! 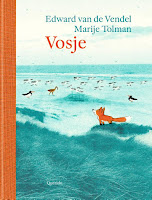