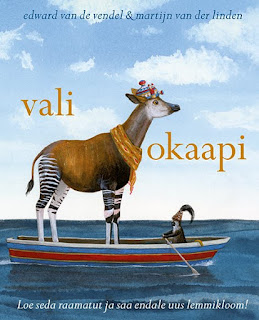 It's not that long ago since Vote for the okapi (in Dutch: Stem op de okapi) was published in Estonia. It was translated by Kerti Tergem and issued by the publishing house of Päike ja Pilv.

The book came out in The Netherlands in 2015 and was the result of illustrator Martijn van der Linden's and my love for this extraordinary animal, the okapi. And now Vali okaapi, as the book is called in Estonia, received the Paabeli Torna auhind 2018, or the Tower of Babel Honour Diploma, which is an award for the best translated book.

This is a very nice award, because only one book is chosen, and previous winners were for instance David Almond, Maria Parr and... J.K. Rowling.

So, congratulations to Martijn, to Kerti and to my Estonian publisher Katrin Reinmaa!
Gepost door Edward op 02:42